Title: Le Cosmonaute
The Cosmanaut
Medium: Original Etching & aquatint, with carborundum and object in releif, in colours, 1969 on Mandeure rag paper, signed by the artist in pencil,
Reference: Jacques Dupin “Miro engraver” Volume II (Catalogue raisonee) Number 479
Note: In
Published by: Maeght Editeur, Paris
Printed by: Arte Adriene Maeght, Paris
Edition: 22/75 - There were also some HC copies made.
Size: 33 x 47 cms (Plate size); 51.5 x 65.5 cms (Paper size)
Note: By convention, an astronaut employed by the Russian Federal Space Agency (or its Soviet predecessor) is called a cosmonaut in English texts. At the time this piece was made there was considerable interest in Space Exploration. Yuri Gagarin became the first human to journey into outer space, achieving a major milestone in the Space Race his capsule, Vostoick 1 completed one orbit of Earth on 12 April 1961 and American and Russian teams competed with each other for new achievements. Doubtless Miro was enthralled by these developments and this occasioned the tilting of this work.
Joan Miró rejected the constraints of traditional painting, creating works “conceived with fire in the soul but executed with clinical coolness,” as he once said. Widely considered one of the leading Surrealists, though never officially part of the group, Miró pioneered a wandering linear style of Automatism—a method of “random” drawing that attempted to express the inner workings of the human psyche. Miró used colour and form in a symbolic rather than literal manner, his intricate compositions combining abstract elements with recurring motifs like birds, eyes, and the moon. “I try to apply colors like words that shape poems, like notes that shape music,” he said. 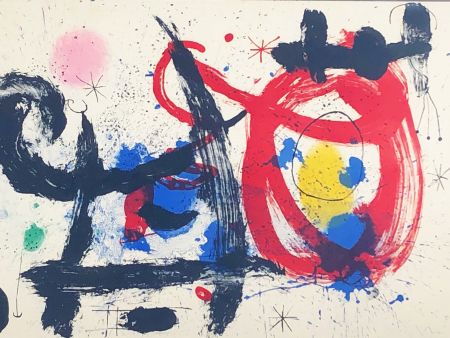 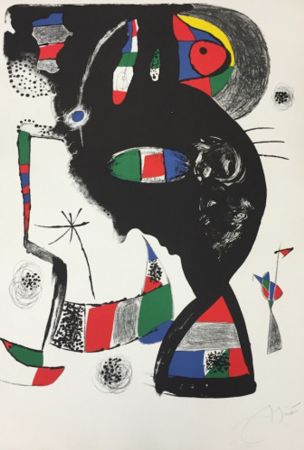 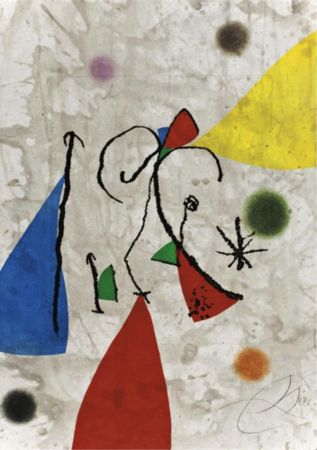 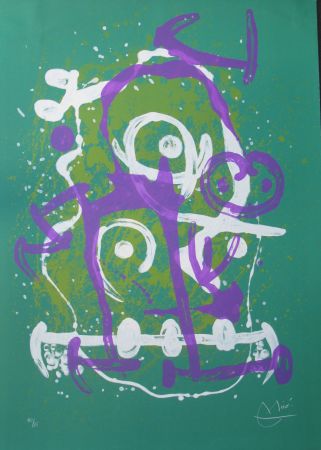